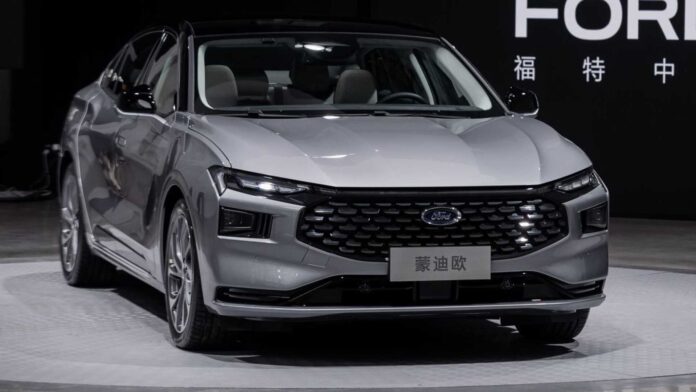 Ford Motor introduced the new generation Ford Mondeo mid-size sedan to China. The car will only be sold inside China.

Recall that the production of the European-style Mondeo will be completely stopped in March 2022, and the assembly of a similar American Ford Fusion model was completed in the summer of 2020 . Ford Motor left the Russian car market in 2019 .

As a result, the new Ford Mondeo was developed specifically for the Middle Kingdom. In this, one can find an ironic connection with the name: initially, the first generation Mondeo was created as a “worldwide” model, which was reflected in the name, derived from the French. le monde – “peace”.

The first images of the sedan hit the Web in November 2021 , then they were posted by the Ministry of Industry of China. The car is designed in the style of the Evos sports crossover and the seven-seater Equator , both are also produced only in China.

The exterior radiates aggression – a dynamic profile, narrowed headlights and a large radiator grill, stampings are used along the entire body. The rear lights have three vertical LED sections, which can be considered a reference to the electric Mustang Mach-E and the regular Mustang. Also used retractable door handles in the manner of Tesla.

The car is based on the Ford C2 light front-wheel drive platform, which is used on the fourth-generation Focus. While Ford does not publish full specifications. Judging by the “245” badge, a 2.0-liter gasoline turbo engine of the EcoBoost family with a capacity of 245 hp is installed under the hood, paired with an eight-speed “automatic”.

The new Ford Mondeo will be produced at the Changan Ford JV plant. The start of deliveries to customers is scheduled for the third quarter of 2022.

Recall that the first generation Mondeo was released in 1993, shortly after that the model won the title of “Best Car in Europe in 1994”. In Russia, the fourth and fifth generation Mondeos were produced at the Ford plant in Vsevolozhsk, bearing factory codes CD345 and CD391, respectively.