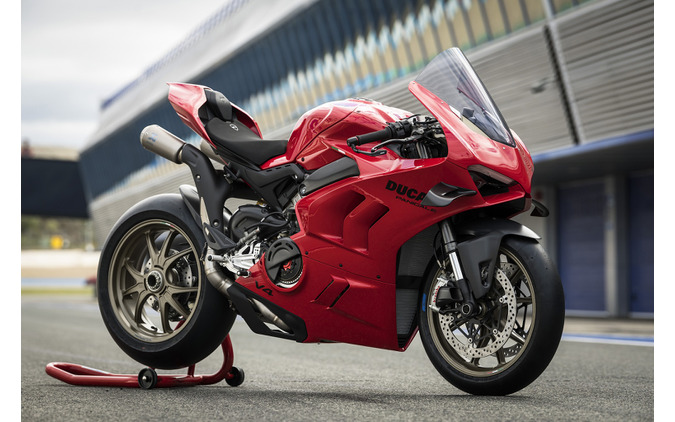 Ducati introduces 7 new models in Ducati World Premiere 2022. One of the world’s largest shows in the motorcycle world is “EICMA”. This event, also known as the Milan Show, is held every year in the suburbs of Milan, Italy. Manufacturers and enthusiastic motorcycle fans from all over the world will gather, and the latest models will be crowded with the media every day.

Naturally, EICMA for Italian manufacturers is a must-see. Prestigious brands such as MV Agusta, Moto Guzzi, Aprilia, Bimota, Vespa, etc. have gorgeous booths and appeal their design and innovation. Among them, Ducati, which is headquartered in Bologna, has given off an overwhelming presence. The brand new model that was unveiled there was the face of the show, having won the “Most Beautiful Bike of the Show” award that supports its popularity during the exhibition.

However, Ducati did not appear at EICMA in 2021. Although there have been signs of this for several years, we chose a style that broadcasts information all over the world online. Called “Ducati World Premiere 2022“, it has completely shifted to the method of distributing the new model scheduled to be released in 2022 on the web. The fact that EICMA was canceled in 2020 in the midst of the corona disaster must have had an effect. Rather than preparing in an unstable situation, web streaming allows us to control everything ourselves in Ducati World Premiere.

While Multistrada’s flagship is equipped with a V-type 4-cylinder engine, this is an entry model with a 937cc 2-cylinder engine. The combination of front 19-inch and rear 17-inch wheels provides high comfort as an all-round sports tourer. Compared to the standard V2, the higher grade V2S is equipped with the Ducati Skyhook Suspension EVO (semi-active suspension). It automatically adjusts the damping force according to the road surface condition and riding mode.

One of Ducati’s identities is the L-type 2-cylinder engine. The first model to adopt that format was the 1971 750GT. A model created with the concept of “Mark your roots” to commemorate the 50 years since then. The traditional yellow and old logo emphasize the classical atmosphere.

Scheduled to be released: During the second quarter of 2022 (April to June).

Whereas the 1100 Tribute Pro uses 18-inch wheels on the front, this one is 17-inch on both front and rear and is equipped with Pirelli’s high-grip tires. As the car name suggests, it will be a model with a strong on-road color that imaged Supermoto. Also, the engine is equipped with 803cc instead of 1079cc. It has a light handling.

Scheduled to be released: During the second quarter of 2022 (April to June).

Introduced in 2021, the Multistrada V4S is a model that combines the face of a sports tourer and a big adventure, but this is completely specialized for on-road. It bears the name of the hill climb race held in the mountain “Pikes Peak” in Colorado, USA, and is given power performance that is as close as possible to super sports. Adopts adaptive cruise control that automatically adjusts the distance to the vehicle in front by radar.

A sports naked developed based on the Panigale V2 equipped with a 955cc 2-cylinder engine. The separate handlebar has been replaced with an up-type bar handlebar, and the thicker seat improves comfort. The vehicle weight is suppressed to 178 kg (dry weight), and it has sharp acceleration and handling.

This is based on the Panigale V4 equipped with a 1103cc V4 engine. As a model with the same origin, the Streetfighter V4 / S has already been lined up, but the performance in the marginal range has been enhanced by carbon wheels, dry clutches, Brembo’s new caliper and so on. The equipment weight is only 196kg for the maximum output of 203ps.

Scheduled to be released: During the third quarter of 2022 (July-September) / During the second quarter (April-June).

This is the latest version of the Superbike, which was announced in 2018 and has been steadily updated. The 1103cc V4 engine has a maximum output of 215.5ps / 13000rpm, and the equipment weight is 195.5kg (STD) / 198.5kg (S). The power-to-weight ratio is well below “1”. In addition to minor changes such as winglet shape, swing arm pivot position, fuel tank capacity, seat shape, etc., the higher grade V4S has the Orleans electronically controlled suspension updated from the conventional NIX30 to NPX25 / 30.

Of particular note is Desert X, which adorned the birds of “Ducati World Premiere 2022“. There is no model with this model name in the past, and it appears as a complete brand new model. The design with the motif of the adventure rally of the 1980s and the strategic price (16,894.02 usd) are attracting a lot of attention.