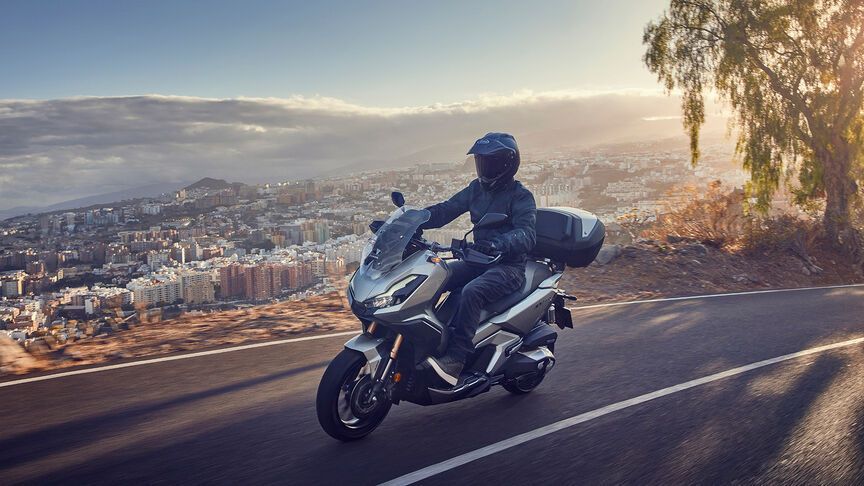 Honda ADV350 officially launched in Europe The design from the X-ADV is perfectly portrayed on the basis of the Forza350. Expect to meet in our home soon.

Honda, the leader in the Japanese motorcycle market Official launch of the new big scooter, Honda ADV350. Continuing the trend of the Honda ADV150, the best driving scooter in its class, 150cc comes out in the form of a 300cc class big scooter based on the basis of Honda Forza350 to develop further. Ready to bring the design of the older Honda X-ADV to be conveyed on a new model named Honda ADV350.

The Honda ADV350 fills the missing part of Honda’s range of scooters. which is the only manufacturer in the market The current market for this type of scooter. The current Forza models include the Honda Forza750, Forza350, and the smaller PCX160, which are considered to be Premium Scooters as well. can own a large motorcycle)

The arrival of the Honda ADV350 fills the gap of the Adventure Scooter family that currently has the Honda X-ADV as the big brother and the youngest Honda ADV150, especially the youngest that is very popular in our home. the so-called “Born to be here” because, as you know, road conditions in our country “How good is the quality” makes the car style auto.

When the Honda ADV150 was launched in Thailand and began to deliver the car for a while including various reviews come out continuously It’s all been said in the same direction that the ADV150 is a very good suspension car. Excellent shock absorption And the design of the bike that makes it clearly easier to control than the PCX160 has made the ADV150 extremely popular among motorcycle enthusiasts who focus on good performance.

However, the Honda ADV150 has one of the biggest drawbacks of the car, which is its “power” that seems a bit low. Because it still uses a 1-cylinder, 2-valve engine, 150cc, the original block itself. It hasn’t been upgraded to a 160cc 4 valve PCX160 engine. “I want it to be a little bigger” because as I said, the ADV150 is a very good suspension car. Suitable for all driving, whether driving near or far. The good way or the illegal way can go all the way, resulting in a current demand for the development of the Honda ADV350 continues.

The Honda ADV350 stands out with its Adventure Scooter design. It has a distance of 145 mm from the ground to the lowest point of the car. It comes with full LED headlights, DNA style, Honda’s ADV Series, and equipped with hand guards.

front suspension Use an inverted shock absorber. The braking system is a single 256 mm disc brake with ABS. The wheels are used for 15-inch alloy wheels with rubber bands of size 120/70 R15, semi-forward type.

Mileage is used as a full digital screen meter. Provides complete driving information Whether it’s the engine tachometer, the amount of fuel, the trip handle, the clock, the Torque control system can be adjusted to 2 levels. It also supports connection to a Smartphone as well.

One-piece seat, divided into 2 sections, separated between the driver and the stacker. The driver’s seat has a height of 795 mm. and stretched to the front, same as Forza350. Large storage space under the seat Holds 2 helmets, same as Forza350. LED taillights with a new design system Although there is a similar aura at the end of the Forza350, but not quite the same.

The Honda ADV350 uses a eSP+ 1 cylinder 330cc SOHC 4-stroke engine, 4 valves per cylinder, liquid-cooled. Delivers a maximum power of 28.83 horsepower at 7,500 rev / min, maximum torque of 31.5 Nm at 5,250 rev / min, transmitted by a belt-driven CVT transmission, which we consider the engine used in the Honda ADV350 as “same block”. with Honda Forza350 in all respects, no matter where the specs are compared They’re all the same

The Honda ADV350 is available in three colors: silver, gray and red.

The release price of the Honda ADV350 is expected to be higher than the Honda Forza350 in our home around 10,000 baht when assessing from the added stuff . Whether it’s an upside-down shock absorber, a new design mileage screen, a mobile phone connection system Which we expect to open the price is not more than 5,217.65 – 5,664.79 usd. because seriously, when spreading the specs, look at each other clearly. It doesn’t offer much traction, as its “ground clearance” is actually 2mm less than the current Forza350 (147mm away / ADV350 away). 145 mm)

Assuming that the car has been sold in Thailand, we expect the “price” to open around this. Thai people can definitely accept it.

So this ADV350 is different from the Forza350 in that it looks and drives easier to control. Compared to the case of PCX160 and ADV150, and from this case, it can be seen that ADV will cost more than PCX, so it is very likely that ADV350 is definitely more expensive than Forza350, just to what level it will open up.