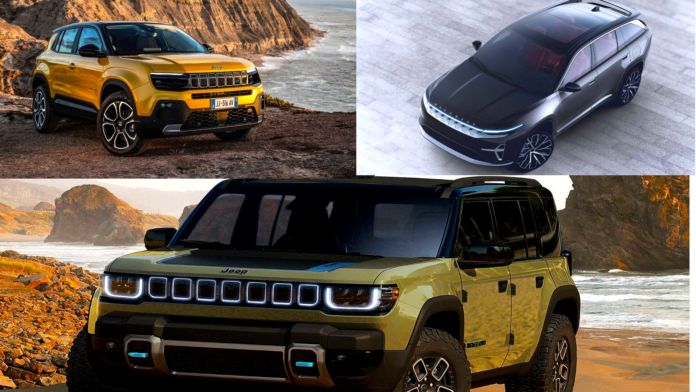 Jeep introduced three electric SUVs The company showed the Recon, Wagoneer S, and Avenger models, one of which will be launched in a series in 2023.

The Stellaris concern held the 4xe Day event, where it presented three electric cars under the Jeep brand at once. The brand’s product strategy provides for the launch of four all-electric models by the end of this five-year period, with the first one appearing in Europe as early as next year. We are talking about a compact crossover Avenger with about 400 kilometers. Jeep’s electric range will also include the Recon all-terrain vehicle and the 600-horsepower Wagoneer S.

The Jeep brand’s electrification plan calls for the launch of four all-electric models by the end of 2025. By 2030, the share of electric cars in the total sales of the brand in the US market will reach 50 percent, and in Europe, by this time, Jeep will have no cars with fuel engines at all. The first-born electric line will be the Jeep Avenger, Jeep Recon, and Wagoneer S – the company showed them at a special event on 4xe Day.

The first all-electric Jeep for Europe will be called the Avenger. A full-fledged premiere of the compact crossover will take place at the Paris Motor Show in October, and next year it will go on sale. Electric cars will be assembled at the plant in Tychy (Poland). In addition to the Old World, the model will be sold in Japan and South Korea. The new Avenger will be a step below the Renegade and can drive about 400 kilometers on a single charge.

This is a compact five-door crossover with streamlined shapes and memorable style. Visually, the whole composition of the headlights and the radiator grill reminds the car of the Renault Duster I. Avenger was created with an eye on the EU market, which is why it has such a characterless exterior. But the car will also be sold in Japan and South Korea. The Avenger will be one step below the current smallest Jeep, the  Renegade, in the product hierarchy. Specifications are not given.

Unlike the Avenger, the Recon SUV is designed for North America. In fact, this is a Wrangler – but in a “green” wrapper. He is promised a Selec-Terrain traction control system, E-Locker electronic differential locks, powerful towing eyes, underbody protection, and off-road tires.

According to the manufacturer, the Recon is capable of driving the famous Rubicon Trail, the most challenging off-road route in the United States, on a single charge. At the same time, he will have enough energy for the way back. The serial Recon will be shown to the public in 2023, production will begin in 2024.

The Recon has a soft top with a one-button folding mechanism. The side doors are easily dismantled using the supplied wrench. Without the doors and roof, the Recon looks like a buggy. Of the technical details, the Jeep press service reports the following: the car has a Jeep Selec-Terrain all-wheel drive system with preset driving modes, an electronic differential lock, and high-profile tires. Engine power and battery capacity are not disclosed. The production version of the Jeep Recon will appear in 2024, and it will not replace the classic Wrangler, it will only complement the lineup.

Finally, the Wagoneer S will feature a unique design. The timing of the appearance of the model is the same as that of Recon. Both SUVs will be sold in all major markets, including Europe. The third prototype belongs to the category of mid-size family crossovers. The car is called Wagoneer S and has a streamlined station wagon body that resembles the modern Grand Cherokee, but differs in other proportions (short nose, long cab) and deliberately minimalistic shapes.

Technical specifications are not given, it is only known that the Wagoneer S accelerates from 0 to 60 mph (97 km/h) in 3.5 seconds and is capable of traveling up to 640 kmThe SUV will receive a power plant with a capacity of more than 600 horsepower and will be able to accelerate to 60 miles per hour (97 km / h) in 3.5 seconds – like the Jeep Grand Cherokee Trackhawk. The declared range is 643 kilometers on a single battery charge. The design of the car is based on the STLA platform.