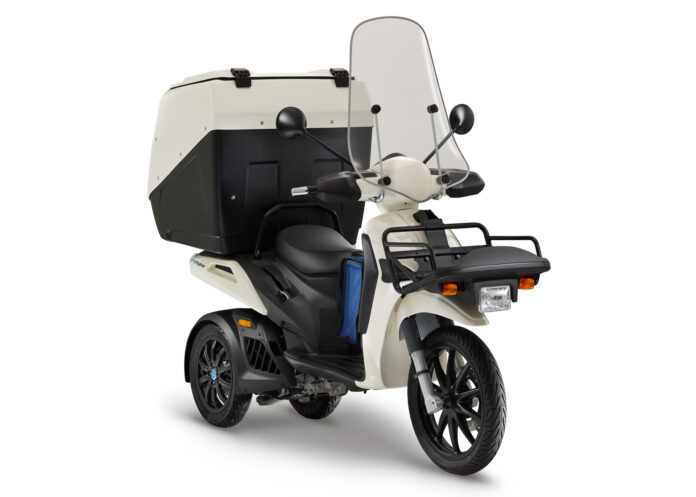 Piaggio Group Japan, which handles the Italian motorcycle maker “Piaggio”, announced that it will introduce the “Mymoover”, a two-wheeled scooter with a moped, in Japan from July 1, 2022.

This model, which was released for commercial use such as delivery in urban areas, is equipped with three wheels and a large trunk at the rear that tilts, realizing gentler and more secure driving performance and boasting high loading capacity.

My Mover is a two-class moped three-wheel scooter equipped with a 125cc single-cylinder engine.

The main feature of Piaggio my mover is the structure that distributes the load with three wheels has excellent ground contact with the road surface, reduces the risk of falling due to manhole covers, road steps, and bad weather, and demonstrates stable driving performance.

In addition, the tilt system that uses the latest tilt mechanism allows the vehicle body to be tilted up to 45 degrees on each side with luggage loaded.

By tilting the luggage together with the rider’s body like a tandem rider, the road grip when cornering is further enhanced and you can turn the curve stably.

High braking ability is also a feature of My Mover. By equipping each of the three wheels with disc brakes and adopting a front-rear interlocking CBS system, balanced braking is possible in various situations.

Also noteworthy is the high loading capacity. The standard 261L large-capacity rear box can carry luggage up to 60kg. In addition, the front rack, which can load up to 20 kg, is body-mounted, so it is designed so that it does not affect handling.

In addition, an A3 size center bag can be attached to the leg shield. With these, it is said that it boasts twice the load capacity of a general 50㏄ scooter (the maximum load capacity of the entire body is 60kg).

First, by equipping it with a system that locks the tilt mechanism and a parking brake, it is possible to stop and park without using a stand. Not only the center stand but also the side stand is unnecessary, so there is no risk of knocking down the bike like a two-wheeled scooter when stopping with heavy luggage.