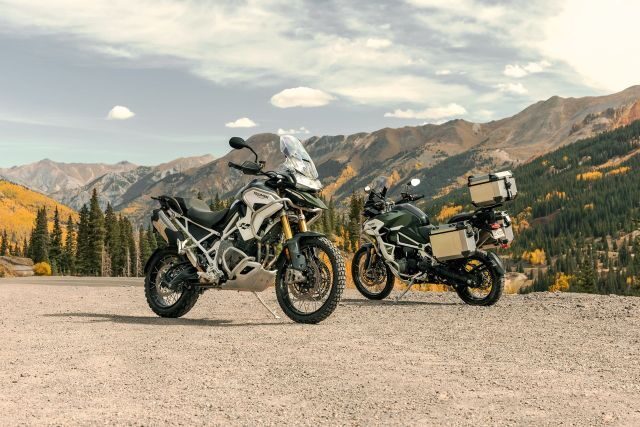 Here comes the new Triumph Tiger 1200 and it is not a single model but a real family, all new. There had already been several previews, now the Hinckley House has officially presented its adventure bike.
Triumph unveils the Tiger 1200: five models between road and rally

Compared to the past it is a revolution, they weigh 25 kg less than the model they replace and are completely new starting from the engine. The new 1160 cm³ three-cylinder with double overhead camshaft distribution is credited with a power of 150 HP at 9000 rpm, that is 9 more than the previous generation, and a torque of 130 Nm at 7000 rpm , i.e. 8Nm more than before; above all, however, exceptional qualities of tractability and quick response at low revs are promised, greater acceleration and more full-bodied delivery from medium revs up to the maximum. It is characterized by the crankshaft called “T” like the one already adopted on the Tiger 900:

Everything is new, including the bore and stroke measurements (90 x 67 mm), the crankshaft, the cylinder heads, the wet clutch, the 6-speed gearbox and the final shaft drive.

The tubular frame is also brand new, 5.4 kg lighter than its predecessor and equipped with an equally new tri-link swingarm. The whole family mounts the semi-active Showa suspension, those of the rally versions with greater travel to adapt to the needs of off-road vehicles: in front of a 49 mm diameter upside-down fork and behind a shock absorber with automatic electronic preload adjustment.

The new Triumph Tiger 1200 have a six-axis inertial platform that oversees all electronic controls, including Cornering Traction Control, cornering ABS and up to 6 riding modes – depending on the model -, they also have a 7 “TFT dashboard with the system connectivity that allows phone calls, navigator and Go-Pro control, but the flagship is the Blind Spot Radar System developed in collaboration with Continental: it warns the driver when a vehicle is approaching from a blind spot, or when another vehicle from behind if the driver is about to change lanes (available on GT Explorer and Rally Explorer).

There are the full LED headlight, the Daytime Running Light and on all models except the 1200 GT the Adaptive Cornering Lights, the assisted gearbox, are also standard. the device that facilitates the uphill restart and the hand grip warmers; on the Explorer also the seat heating and tire pressure control.

The muscular yet sleek silhouette of the new Tiger 1200 is also unprecedented, characterized by clean lines and a lighter front, in which the adjustable windshield stands out. It is also possible to adjust the height of the saddle and if necessary a lower one is available in the extensive catalog of options.